Join the StageAgent community to learn more about this monologue from When Bad Things Happen to Good People and unlock other amazing theatre resources!

Upgrade to PRO to learn more about this monologue from When Bad Things Happen to Good People and unlock other amazing theatre resources!

They Chose Me! - Musical

(DEWEY, a nervous student dressed in farmer’s clothes, enters and walks to center stage. Stops. Out to audience:)

DEWEY: Welcome to Kansas. My name’s farmer Ben. I bet a lot of you think nothing ever interesting could happen on a farm in Kansas, and for the most part you’re right. Nothing really has. That is, until one day, a horrendous tornado swept through town and took my Aunt Dorothy to a mystical place called Oz. But I’m getting ahead myself. Let me first introduce you to…

(Beat. Uh oh. Calling to the back of the house:)

DEWEY: I know you said that during a real performance we wouldn’t be allowed to call for line but… I need a line. I think just giving me my line would be better than holding up the show so. Line. Line!

(Still no response. He laughs nervously. He looks off, starting to panic.)

[From off stage, unheard:] No.

DEWEY: What do you mean you don’t have a script? But you’re the stage manager! How do you not have a copy of the script?! How are you cuing the show? But I don’t know my lines! Where’s Ms. Rhinehart!? A date?!

(Beat. Lucy says something from off stage.)

DEWEY: A date?! (Beat. Then faces out:) So… I’m gonna leave now. Hope you enjoy our one-act version of The Wizard of Oz. I’m sorry I forgot my monologue. 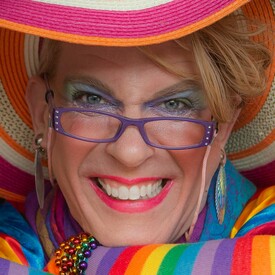