One Empire, Under God

In the year 2411 AD, two years into his presidency, U.S. President

Join the StageAgent community to learn more about this monologue from One Empire, Under God and unlock other amazing theatre resources!

Upgrade to PRO to learn more about this monologue from One Empire, Under God and unlock other amazing theatre resources!

(Moonlight bathes the stage. The set is...

At this hour, the Pentagon has been requested

to fire a series of missiles aimed at

the governments of various nations -

some authoritarian or harboring terrorists,

others whom are working with such nations -

and shall continue firing until

these governments have offered

unconditional surrender to the United States.

These nations all across Europe,

Asia and Africa have been given

one chance after another

to come to the negotiating table,

but at this point,

we have no other choice.

for our civilization, but I assure you,

once this operation is complete,

the United States will emerge stronger than before.

As strong as we have been in times past,

never before have we, as a nation,

Never before will the people of the world

such as that which we are unleashing tonight.

And never, ever before has there been

an empire as strong and as powerful

as the one that shall emerge from the ashes of what 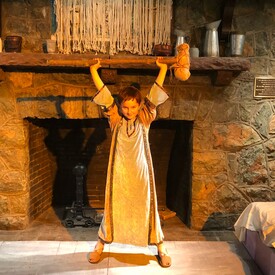