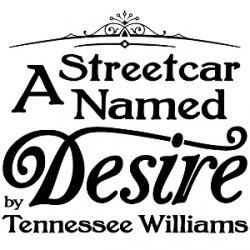 The night before, a drunken Stanley lashed out at his wife, Stella,

Join the StageAgent community to learn more about this monologue from A Streetcar Named Desire and unlock other amazing theatre resources!

Upgrade to PRO to learn more about this monologue from A Streetcar Named Desire and unlock other amazing theatre resources!

A Loss of Roses - Play

He acts like an animal, has an animal's habits! Eats like one, moves like one, talks like one! There's even something--sub-human--something not quite to the stage of humanity yet! Yes, something--ape-like about him, like one of those pictures I've seen in--anthropological studies! Thousands and thousands of years have passed him right by, and there he is--Stanley Kowalski--survivor of the stone age! Bearing the raw meat home from the kill in the jungle! And you--you here--waiting for him! Maybe he'll strike you ir maybe grunt and kiss you! That is, if kisses have been discovered yet! Night falls and the other apes gather! There in front of the cave, all grunting like him, and swilling and gnawing and hulking! HIs poker night!--you call it--this party of apes! Somebody growls--some creature snatches at something--the fight is on! God! Maybe we are a long way from being made in God's image, but Stella--my sister--there has been some progress since then! Such things as art--as poetry and music--such kinds of new light have come into the world since then! In some kinds of people tenderer feelings have had some little beginning! That we have got to make grow! And cling to, and hold as our flag! In this dark march toward whatever it is we're approaching. . . . Don't--don't hang back with the brutes!

Optional addition at beginning of monologue:

Suppose! You can't have forgotten that much of our bringing up, Stella, that you just suppose that any part of a gentleman's in his nature! Not one particle, no! Oh, if he was just--ordinary! Just plain--but good and wholesome, but--no. There's something downright--bestial--about him! You're hating me saying this, aren't you?