Tensions are running high in H.M. Prison Larkhall. Old school prison officer, Jim Fenner, reigns over his corrupt domain, assisted by his willing supporter and fellow officer, Sylvia “Bodybag” Hollamby. He asserts his control over the female prisoners, encouraging sexual favors in return for preferential treatment. In the prison, we meet the ultimate top-dog inmate Yvonne Atkins, old-timer Noreen Biggs, the comical Two Julie’s, and ruthless Shell Dockley, who manipulates fellow inmate Denny Blood to do her dirty work. However, Jim Fenner’s rule is interrupted by the appointment of the new Wing Governor, the idealistic Helen Stewart. She contests Jim’s way of running things and the pair quickly butt heads. Helen’s situation is further complicated when she finds herself in a complicated relationship with charismatic prisoner, Nikki Wade.

However, chaos comes to the prison wing when Jim Fenner is implicated in the suicide of new prisoner, Rachel Hicks. As the inmates protest and make their voices heard, Helen Stewart’s job and reputation are on the line. Rising up, inmates and staff decide that it is time for Jim Fenner to face up to his misdemeanors and be exposed as a corrupt officer once and for all.

View All Characters in Bad Girls: The Musical 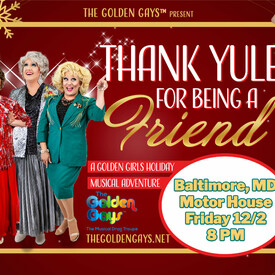 Thank YULE for Being a Friend": Golden Girls Holiday Musical!