Revolving around the music of British band, Madness, Our House follows the story of London lad Joe Casey. On the night of his sixteenth birthday, an over-excited Joe takes Sarah, the girl of his dreams, out for a romantic evening. On a whim, he breaks into a new building development near his house to show Sarah the view over north London. When the police come, Joe faces a tough decision: to run, or give himself up. It is at this point that the story splits in two as we follow the fortunes, and misfortunes, of Good Joe and Bad Joe. Good Joe stays, hands himself over to the police and faces imprisonment and social embarrassment,. However Bad Joe flees, leaving Sarah alone, and turning his lucky escape into a high-risk future in illegal business. Once released from juvenile detention, Good Joe fights to keep Sarah as she drifts further away from him, caught up in university life. Meanwhile Bad Joe gets in with a criminal crowd and becomes a successful, if dishonest, businessman in property development . He meets Sarah once more and she is bowled over by his new, confident lifestyle. Swept away, Sarah marries Bad Joe in Vegas but soon lives to regret her decision. Meanwhile, Good Joe struggles to earn an honest living and must accept that Sarah has a new life and a new boyfriend. But when his beloved Casey Street is threatened with demolition, he turns to Sarah once more in her new role as a lawyer and the pair rekindle their love.

The two differing paths of Joe Casey’s future are carefully watched over by Joe’s deceased father, who regrets his own criminal choices that saw him neglect his family. As the parallel worlds of Good and Bad Joe Casey head towards an explosive climax, we find out which decision the 16-year-old Joe made--to turn his back on a life of crime and do the right thing.

View All Characters in Our House 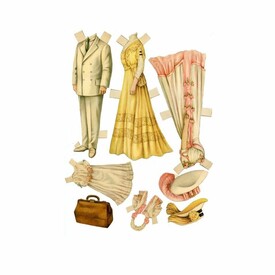