The House of Blue Leaves

The lives of a Queens, New York, family get turned upside down as Pope Paul VI visits New York City. Artie Shaughnessy, a zookeeper/failed singer-songwriter, longs to find fame in Hollywood with his girlfriend, Bunny. Artie’s mentally ill wife, Bananas, with whom he lives, imagines herself to be animals. Artie has found an institution for her–with trees with blue leaves–and will take her there before moving to California with Bunny, hopefully to find fame, fortune, and favor from his best friend, Billy, a Hollywood director. Artie and Bananas’ son, Ronnie, is illegally home from the Army attempting to assassinate the Pope, and soon, the family’s evening is disrupted by three nuns and Billy’s deaf actress-girlfriend. Chaos erupts when characters’ lives intersect as they all try to be in the presence of the Pope on this historic day. The House of Blue Leaves is a hilarious, heartbreaking, farcical journey through one New York apartment where characters engage directly with an audience who will at the same time adore–and admonish–them all. The play includes musical elements, with Artie’s songs (music and lyrics), provided in the script, written by the author.

View All Characters in The House of Blue Leaves 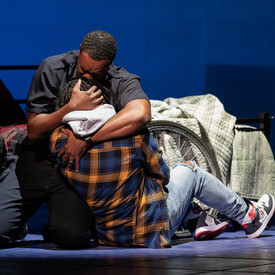