Am I Blue, the first play of well-known author Beth Henley, is a brief one-act that opens on a rainy street in the French Quarter of New Orleans. John Polk, a young college student, is having a drink at a dingy bar when he meets Ashbee, a small and feisty 16-year-old girl dressed a bit maturely for her age. She’s hiding in the bar to steal their ashtrays, and sees herself somewhat as Robin Hood, stealing objects from establishments she doesn’t like to gift to poorer residents and street-dwellers in this part of town. Though her presence is clearly irksome to John Polk, who is trying his best to stay drunk, Ashbee charms and cajoles her way into begrudging conversation with him. Her keen observance of the characters that come through her neighborhood means she can easily figure out that John Polk is here waiting for an appointment with a prostitute at a brothel close by. When the waitress, Hilda, realizes that both are underage, she kicks them out of the bar, and Ashbee encourages them to visit her home while he waits for his appointment at the brothel. Her father is out of town, she explains, and her mother and sister live in Atlanta. Once they arrive at her run-down apartment, it’s clear that Ashbee exists outside adult authority. She makes John Polk feel at home in her unusual, independent way, and shows him how she carves out personal space for herself in a wild world around them. Ashbee, who has needed to grow up too fast, is anxious to be validated by someone who admires her true qualities, and John Polk needs a friend with whom his naivete won’t make him feel ashamed. As John Polk waffles over whether to show up at the brothel and Ashbee encourages him to be true to himself, an unmistakable bond is formed that allows each character to confront some of the less simple parts of their longing for connection. Am I Blue, both sweet and yearning, wrestles with coming of age, especially in terms of human sexuality, and reflects on what it means to grow up with agency, on your own terms, instead of at the hands of the narrative society expects of you.

View All Characters in Am I Blue

Am I Blue guide sections 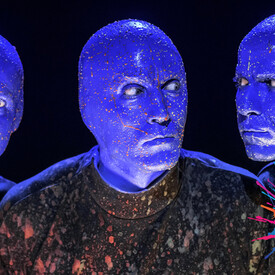