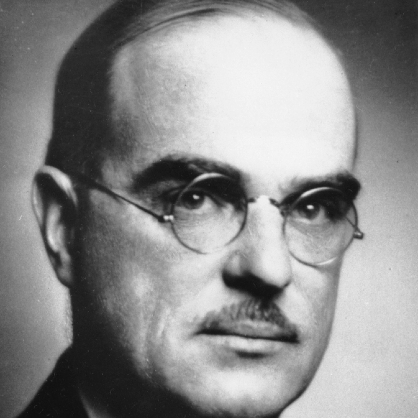 Born in Madison, Wisconsin in 1897, Thornton Wilder's early life and family was marked by travel and intellectual pursuits. His father, Amos Wilder, was a newspaper editor and then a United States consul general to Hong Kong. This prompted the family's move to Shanghai in 1909. Isabella Wilder, Thornton's mother, was a lover of languages, literature, and drama--even translating Italian and Dutch works.

With this influence, it is not surprising that Wilder himself pursued a career of literature, languages, and education. He first attended Oberlin College, then transferred to Yale University and graduated with a Bachelor of Arts in 1920. He studied in Rome for a period of time, where he wrote his first novel, The Cabala, in 1921. In 1926, Wilder completed his Masters of Arts in French literature from Princeton University.

Before attending college, however, Wilder was enlisted in the Army, rising to the rank of corporal during World War I. When World War II broke out, Wilder returned to military service working in Air Force Intelligence and became a lieutenant colonel. He won several awards for his service, including the American Bronze Star and an honorary Member of the Order of the British Empire (MBE).

Wilder was a visiting professor at Harvard University, always considering himself a teacher first. But he was a prolific and award-winning writer--notably the only author to win the Pulitzer Prize for both fiction and drama. In total, Wilder received three Pulitzers: the novel The Bridge of San Luis Rey (1928), and the plays Our Town (1938) and The Skin of Our Teeth (1943). His 1967 novel The Eighth Day won the National Book Award. Wilder was also personally invited to compose the screenplay for Alfred Hitchcock's 1943 film Shadow of a Doubt.

After his initial commercial success of The Bridge of San Luis Rey, Wilder built a home for his family in Connecticut. While he often traveled, he always returned to this home, which he called "The House The Bridge Built." He died there in 1975.

The Skin of Our Teeth

View All Shows By Thornton Wilder