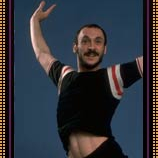 Micahel Bennett is an American choreographer, director, dancer, and writer best known for his work on A Chorus Line, Promises, Promises, and Company. Born in Buffalo, New York, to a Jewish-Italian family, Bennett studied dance and choreography in his teens and dropped out of high school to perform the role of Baby John in the US and European tours of West Side Story. His career on Broadway began as a dancer in the Comden and Green musical, Subways Are for Sleeping (1961). He danced in other shows such as Here’s Love and Bajour before becoming a featured dancer in the NBC pop music series Hullabaloo, where he met fellow dancer and his future wife, Donna McKechnie.

Bennett’s choreography debut was with A Joyful Noise (1966). Bennett’s choreography style was described as fluid; being driven by the music and the characterization as opposed to having one distinct style. His first success was with Promises, Promises (1968) on Broadway. While working as a choreographer, Bennett also directed many shows on Broadway during this time including Company and Follies, which he co-directed with Hal Prince. In 1973, Bennett was credited with having written, directed, and choreographed the Broadway production of Seesaw. However, Bennett’s biggest project came with A Chorus Line (1975). Bennett co-choreographed and directed the production, which won nine Tony awards and the 1976 Pulitzer Prize for Drama. He was a creative consultant on the film production, but left the project due to creative differences. Throughout his career, Bennett won seven Tony awards for his choreography and direction, and was nominated for an additional eleven.

In his personal life, Bennett had a long personal and professional relationship with Donna McKechnie, who danced in his productions of Promises, Promises, Company, and A Chorus Line. They were married on December 4, 1976, but separated after a few months before divorcing in 1979. Bennett struggled with an addiction to drugs and alcohol, which led to severe paranoia and impeded his ability to work. Bennett identified as bisexual and had many relationships throughout his life. His last partner was Gene Pruit, who stayed with Bennett as he was receiving treatment for AIDS-related lymphoma in 1986. Bennett passed away from the disease at the age of 44, leaving behind a portion of his estate to fund AIDS research.

View All Shows By Michael Bennett