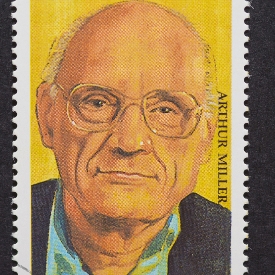 Arthur Miller is one of the most celebrated American playwrights of the twentieth-century and his works continue to be studied and performed across the world today.

Miller was born into an immigrant family of Polish and Jewish descent in 1915. The family lived in Manhattan until they suffered financially in the Wall Street Crash of 1929, whereupon they moved to Brooklyn. Miller attended the University of Michigan, where he began to write for the school newspaper and tune his playwrighting skills. After graduating, Miller moved back East and tried his hand at writing professionally for the stage. His first Broadway play in 1944, The Man Who Had All the Luck, was a flop and closed after only four performances. However, he struck gold with his next play, All My Sons (1947). It was a huge hit and earned Miller his first Tony Award for Best Author.

In 1949, Death of a Salesman opened at the Morosco Theater and became an instant hit. It had the accolade of winning the Pulitzer Prize, New York Drama Critics’ Circle Award, and six Tony Awards (including Best Play and Best Author). It has since established its place as one of the most iconic plays of the twentieth-century and is regularly featured on exam syllabuses across the world.

Miller followed this success with another seminal work: the Tony Award-winning, The Crucible (1953). This was followed by A View From the Bridge in 1955. However, The Crucible also brought other, unwanted scrutiny when Miller was brought before the House Un-American Activities Committee in 1956 because of the play’s allegorical description of Senator Joseph McCarthy’s activities in America at the time.

During his turbulent marriage to Marilyn Monroe, Miller wrote very little but, after their divorce and Monroe’s death in 1962, he went on to write After The Fall (1964), Incident at Vichy (1964), and The Price (1968). His later works continued to explore and critique American society and its belief system, however they did not receive the critical acclaim that his previous works had garnered.

Miller’s works have also been adapted for both the small and big screen. In 1985 a TV version of Death of a Salesman was produced starring Dustin Hoffman and in 1996 a film adaptation of The Crucible was released starring Winona Ryder and Daniel Day-Lewis. The screenplay for The Crucible earned Miller his first and only Academy Award nomination.

Arthur Miller died in 2005 at the age of 89 from heart failure after a battle with cancer. Coincidentally, the day he died was the 56th anniversary of the Broadway debut of Death of a Salesman.

Death of a Salesman

View All Shows By Arthur Miller