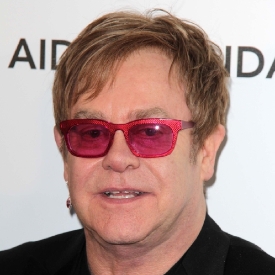 He was born in Middlesex in 1947 and started playing piano at the age of three. Aged eleven, he won a junior scholarship to the Royal Academy of Music, attending lessons in London on a Saturday. At the age of fifteen, he got a part time job as a pianist in a nearby pub and in 1962, he started his first band, Bluesology. The band soon got gigs supporting several American R&B and soul musicians. Then, in 1967, he was introduced to Bernie Taupin and changed his name to Elton John.

From 1967-9 Elton John and Taupin wrote for many of the hit singers and bands of the period, with Elton also jobbing as a session musician for other artists. By 1969, the pair were focusing on material for Elton to sing and began to produce albums together. “Your Song” (1970) was Elton’s first big hit single as a singer in both the US and UK. Since then, Elton John and Taupin have collaborated on more than 30 albums to date. In a career spanning five decades, Elton John has sold more than 300 million records, making him one of the best-selling music artists in the world.

Pairing up with Sir Tim Rice, Elton John wrote the songs for the 1994 Disney film The Lion King, which won the Academy Award for Best Song for “Can You Feel The Love Tonight”. The musical version of the film premiered on Broadway in 1997, and in London’s West End in 1999. In 1999, Tim Rice and Elton John teamed up again to write the music for Disney’s musical, Aida, which won the Tony Award for Best Original Score. In 2005, he returned to the world of musical theater, composing the score for Billy Elliot the Musical in 2005, which became the eleventh longest-running musical in the history of the West End.

To date, Elton John has received six Grammy Awards, an Academy Award, a Golden Globe Award, a Tony Award, a Disney Legend award, and the Kennedy Center Honors in 2004. In 1992, he was inducted into the Songwriter’s Hall of Fame.

View All Shows By Elton John