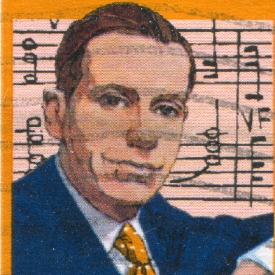 Cole Albert Porter (June 9, 1891 – October 15, 1964) was an American composer and songwriter. By the end of his life, he had written over 800 songs and is synonymous with the Golden Age of the twentieth century American musical.

He was born in 1891 in Indiana to a wealthy family. He enjoyed the comforts of growing up learning the piano and violin and, by the age of 11, had written a song that he managed to get published with the help of his mother. However, Porter had to battle against the domineering influence of his grandfather who wanted his grandson to study law. Whilst at Harvard Law School, Porter switched to studying music without his grandfather’s knowledge.

Although his first Broadway musical, See America First (1916), was not a hit, Porter moved to Europe and began to write songs for London shows. By the 1930s he was one of the major songwriters for the Broadway musical stage, with hits such as ‘Night and Day’ (sung by Fred Astaire in the musical Gay Divorce) and a catalog of songs in the hit musical Anything Goes (1934). Unlike many successful Broadway composers at the time, Porter composed and wrote the lyrics for his songs. However, his songs were not confined to the stage – songs such as ‘I’ve Got You Under My Skin’ and ‘In the Still of the Night’ were all written for films.

Porter was left disabled and in constant pain after his horse fell on top of him and crushed both legs in 1937. He continued to work and produced some memorable songs. However, his shows did not receive the critical success that they had in the 1930s. In 1948 he made a triumphant comeback with his most successful musical, Kiss Me, Kate, adapted from William Shakespeare’s The Taming of the Shrew. It was a big hit and won the first Tony Award for Best Musical.

In 1958, Porter had to have his right leg amputated as a result of his injuries. This was a terrible blow to the musician and he withdrew from both public and professional life. He died in California in 1964, aged 73.

View All Shows By Cole Porter