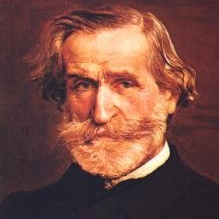 As something of a child prodigy, Giuseppe Verdi began his study of music at the age of four, and by the age of nine was taking on the organist duties at the village church. Although is parents were not wealthy, they did everything they could to encourage his musical talents, and the young Verdi caught the attention of Antonio Barezzi, who became his patron. Through Barezzi's support, Verdi was able to continue his formal study of music in Milan.

At the epicentre of operatic creation in Italy, Verdi thrived. His soon gained connections with the musical and literary talents of his day, and began composing in earnest, although his first opera Oberto was not produced until 1839.

His career was not without its set backs. His attempts at comic opera in his early career were booed offstage. The loss of his young wife, and two of his children, led to a period of depression, which was only relieved with the production of his opera Nabucodonoser, now known as Nabucco. That concreted Verdi's reputation as Italy's new operatic genius. His melodies were sung in the streets, and his name was to go down in history.

In the years that followed he produced I Lombardi and Ernani, closely followed by I due Foscari, Il corsaro, and Giovanna d'Arco, and many others.

What is now considered the 'middle-period' of Verdi's writing began with Macbeth in 1847. After this, his compositions took on a new dramatic depth and musical richness, and these operas are some of the most famous and most regularly performed operas in the canon; Rigoletto, Il trovatore, and La traviata.

View All Shows By Giuseppe Verdi