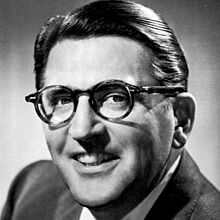 Meredith Willson was born in Mason City, Iowa, where he attended school and eventually married his high school sweetheart in 1920. This would be the first of Willson’s three wives. He was a talented musician, being highly proficient in the flute and piccolo. He was accepted to perform as a member of the highly esteemed John Philip Sousa band and would later on go to join the New York Philharmonic. One can tell he took inspiration from his young life and hometown to create his best known piece, The Music Man.

Before he got his legs on Broadway, he worked in Hollywood radio. He was a music director for many popular radio shows throughout the 1940s and 1950s. It was during this time that he was working on what would be his smash hit, The Music Man. This show took the Broadway stage in 1957 and was an instant hit! The show ran for 1,375 performances in its original run, and this brilliant work of Willson’s would go on to be revived many times, including a successful film adaption in 1962 and a television adaptation in 2003. His next Broadway show was The Unsinkable Molly Brown, and though not as popular as The Music Man, had a solid run. Running for 532 performances, the musical gained enough traction to be made into a film in 1964, starring Debbie Reynolds. His third Broadway musical, Here’s Love, a musical adaptation of the film Miracle on 34th Street, Is known to many as a failure, yet still had a solid eight-month Broadway run.

Willson also wrote pieces of both classical and popular music. He composed for many popular artists, such as Bing Crosby and Frank Sinatra. He even composed the hit Christmas classic, “It’s Beginning to Look a Lot Like Christmas". His music made the Billboard top charts and would be known by many for years to come.

View All Shows By Meredith Willson