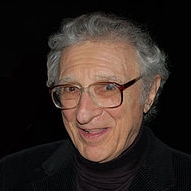 Sheldon Harnick is an American lyricist and songwriter who is best known for his collaborations with Jerry Bock and beloved musicals such as Fiddler on the Roof. Born in the Chicago neighborhood of Portage Park, Harnick began writing music while attending Carl Schurz High School. He was drafted in World War II and honorably discharged in 1946. After completing his military service, Harnick graduated from Northwestern University School of Music with a bachelor’s degree in music in 1949. Harnick began working for various orchestras in the Chicago area before moving to New York City. Writing musicals and revues, Harnick was introduced to one of his idols, Yip Harburg, a popular lyricist and librettist of the time. Harburg became a mentor of Harnick’s, encouraging him to write with a variety of composers and to include comedy songs in his repertoire.

Harnick met Jerry Bock, his longtime collaborator around 1965. Together, they would write some of the most beloved scores in musical theatre history. Their first show, The Body Beautiful (1958) did not garner musical success; however, their second show, Fiorello! (1959) won the Pulitzer Prize for Drama. Some of their other major works include She Loves Me (1963), The Apple Tree (1966), and their most celebrated musical, Fiddler on the Roof (1964). Beyond his work with Bock, Harnick wrote the libretto for the opera Coyote Tales (1998), was the writer of the book, music, and lyrics for Dragons (2003), and wrote the lyrics and co-wrote the book for The Phantom Tollbooth (2007).

Harnick is a celebrated artist in the musical theatre community. He has been awarded the Pulitzer Prize for Drama (1960) and three Tony Awards (Best Musical for Fiorello! and Fiddler and Best Composer and Lyricist for Fiddler). Bock and Harnick were presented with the Oscar Hammerstein Lifetime Achievement in Theatre in 2009. The composing team also received a Drama League Award for Distinguished Achievement in Musical Theatre as well as a special Tony Award for Lifetime Achievement in Theatre in 2016.

Fiddler on the Roof

View All Shows By Sheldon Harnick