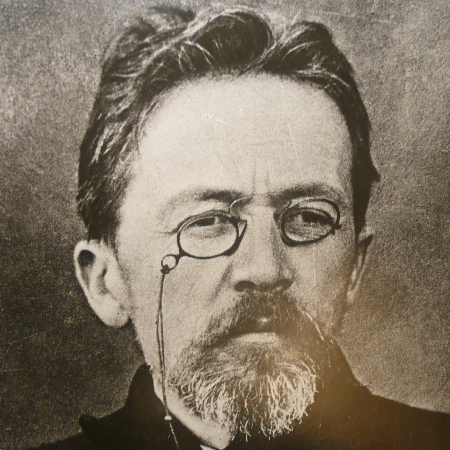 Anton Chekhov was one of the foremost Russian playwrights of the late nineteenth and early twentieth-century. A master with words and storytelling, his plays continue to be translated and performed across the world. He is one of the key literary figures of early modern theater and his work continues to influence writers today.

Chekhov was born in Taganrog, Russia in 1860. He moved to Moscow in 1879 to enrol in medical school. While there, he supported his family financially by selling short, comical stories to local magazines. Whilst practising as a doctor in the 1880s, he began to write works of fiction with a more serious tone. One of his stories, “The Steppe”, brought Chekhov critical success, winning The Pushkin Prize in 1888. As well as works of fiction, Chekhov also began writing for the stage during this period and he developed his signature style of mixing comedy with tragedy to great effect. This can be seen in his earlier works, such as Ivanov (1887) and The Wood Demon (1889).

During the 1890s, Chekhov’s style began to become more character-driven, as he focused less on plot development but gave more prominence to the mood and inner struggles of his fictional characters. The late 1890s produced some of Chekhov’s best-known works, with plays including The Seagull (1895), Uncle Vanya (1897), The Three Sisters (1901), and The Cherry Orchard (1904).

Chekhov married Olga Knipper, a Russian actress, in 1901. However, he was already struggling with his health, suffering repeated bouts of tuberculosis. At the age of just 44 years old, Chekhov died while staying at a health resort in Badenweiler, Germany.

At the time of his death, Chekhov’s plays were hugely popular in Russia. However, following the revolution, his plays fell out of fashion and were not regularly performed. Although they were later refashioned by the Soviet regime to fit their new order--for example, Lopakhin is reimagined as a hero for chopping down the cherry orchard—Chekhov’s plays were once more performed across Russia and, indeed, the world.

View All Shows By Anton Chekhov